Video Yips Coaching from Anywhere in the World - LEARN MORE!

Who Will Have the Yips?

The long putter or anchored putting has been allowed for several decades as an alternative to the sometimes-problematic traditional length putter.

This controversial decision may present problems for many successful golfers.

Some golfers have chosen to switch to the long putter or anchored putting over the past few decades as a method of avoiding the yips, an anxiety based performance issue that causes spasms in the hands before striking the ball.

This issue makes it extremely difficult for players to perform under the stress of the traditional length putter. These players agree that the changing of this rule is unfair and unnecessary as it targets a small group of golfers struggling with this issue.

Of the golfers affected by this new policy, one of the most interesting cases is that of Tim Clark.

Clark was born with a genetic disorder that does not allow him to turn his forearms and palms upward.

Thus, the ban affects him in a particularly unfair way.

“When I first heard about it [a lawsuit] certainly came to mind.”

Considering the toll it would make on him mentally and financially if unsuccessful, Clark decided against the lawsuit.

Bernhard Langer, has spoken out about the issue as well, saying,

“I don’t understand the issue. It affects a few people. I think they have bigger issue in golf to deal with than the long putter.”

Still the issue remains and golfers have limited time to find a way to adjust.

Some golfers have decided to try to make adjustments early, rather than waiting for the inevitable in the coming year.

One of these players, Webb Simpson, has never ranked less than 58th over his last six years on tour. After switching to the traditional length putter, he has dropped to 165th.

“With the short putter, I was a real streaky putter,” explained Simpson.

The consistency he found in the long putter will definitely be difficult to match given the impending change.

Adam Scott, who has been using the long putter for the past four years, favors a different approach.

“To have my best results consistently I need to stick with what I worked on for the last four years and become very good at,” Scott said. “I’ll have time again at the end of the year to make a change and probably have a little more of a better understanding of exactly what I want to do with it now that I have at least played a couple of events with the shorter putter.”

Those directly affected are not the only ones voicing their disapproval of the ban. Phil Mickelson, although he himself has used the long putter over the course of his career, spoke out against the ban.

“I don’t think you can take away what you’ve allowed players to use, practice, and play with for 30 years. I think it is grossly unfair.”

Despite the protests of various golfers, the change has proven to be inevitable.

Therefore, the most important issue to address is handling the putting yips before the January 1st deadline.

Golfers can follow a few tips that will help improve their mental game and thus help them overcome the source of the problem.

Tip 1: Don’t expect the yips to return when you switch back to a short putter. That will lead to a self-fulfilling prophecy—if you think the yips will return, they will.

Tip 2: Work on the drills to free up your putter at puttingyips.com. Download the drills here: http://www.puttingyips.com/free-putting-yips-report/. Learn how to putt freely no matter what putter you use.

Related Article: Visualize Yourself as a Great Putter 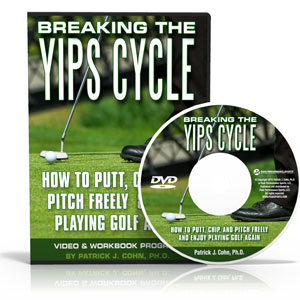 Golfers: Learn how to overcome the fear that keeps you stuck in a vicious cycle

Instructors: Learn how to give your students the mental game edge.

Coaches: Help your team members play with freedom instead of fear or tension.

“To play well, you have to believe you can play well. Confidence goes a long way in golf. Dr. Cohn has developed a great system that helped me improve confidence and my overall mental approach to golf.
~Brian Watts, 11-time Winner on the PGA Japan Tour

Do you spend most of your practice time trapped by stroke or mechanics on the practice green?

Are you unsure how to practice to hep you overcome the putting yips?

Download our FREE putting report and drills to help you unlock your putting potential today!

What are golfers saying about our putting yips drills?

“The mental side is everything in golf—the ability to see your shot or line and trust that you can hit that shot or putt. Dr. Cohn has helped me trust my game and putting  stroke.”
~Frank Lickliter, PGA Tour, Nike Tour Winner

You can work with Dr. Patrick Cohn himself in Orlando, Florida or via Skype, FaceTime, or telephone. Call us toll free at 888-742-7225 or contact us for more information about the different coaching programs we offer!

“To win at any level, you have to train both your mind and body. Dr. Cohn does an excellent job of teaching you how to develop confidence and touch around the greens, both of which are vital to any player’s success. Dr. Cohn has taught me excellent practice drills for putting that have helped me become a better putter.
~J.L. Lewis, PGA Tour winner